work from my sketchbook.  i started making a point of drawing sculptural work when visiting galleries and exhibitions – capturing in two dimensions things that should fundamentally be seen in three.  some of these were done when visiting exhibitions with students as demonstrations of working quickly, that the work in the sketchbook doesn’t have to be ‘perfect’ or what they regard as effectively a ‘finished piece.’  these sketches are often done fairly quickly, parts are rough – for me they are often an exercise in looking, familiarising myself with a subject that i may later develop work from; so the drawing doesn’t always have to be ‘perfect’ because it’s a preparation for later work.  a major part of the activity of drawing should be about looking – when often they’re fixated on their paper while drawing instead of looking more at what they’re drawing from. even worse is when students take a photograph of something on their phone and then sit right in front of the object and draw from the picture on their phone!

some people like to use their sketchbooks for developmental or experimental work, to record ideas or notes, or to gather materials and ephemera whereas i use my sketchbook in a very specific way – almost always it will be to record from observation.  sometimes the work is for a specific project, sometimes as a record of visiting somewhere or doing something, but mainly just to draw because i enjoy drawing. 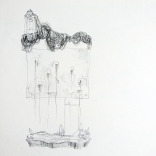 i hope you like the sketches above  they were done visiting the following exhibitions/galleries:

the falcon and malefactor by peter hiorns at the herbert art gallery, coventry

the castle from pavel buchler retrospective at ikon gallery

giacometti: hour of the traces, germaine richier: diabolo, julian trevelyan: bomblet, joseph beuys: lightning with stag in its glare – all from tate modern

1 Response to sketches from exhibitions 2