i recently worked on publicity material

for an exhibition of work by friends and past collaborators hugh marwood, shaun morris and andrew smith at artists workhouse in studley. the exhibition was described as “working across a range of practices including drawing, painting, printmaking, photography, text and video. the exhibition, in its broadest terms, presents as its overarching theme different imaginative responses to the urban environment.”

the choice of image used across the poster, flyers and booklet came from the artists.  it was from a photograph of shaun’s and appears a little blurred or low-res in all of the publicity material – this was because of a conscious decision to scan prints of his photos rather than using the original digital files so that the images didn’t appear perfect and also included dust and dirty marks (some from my scanner!).

as well as the usual flyers and posters, the guys also wanted a publication to accompany their exhibition – this was to be a stand-alone artefact rather than a typical exhibition catalogue listing the work on show. it was quite an open brief – they provided me with the content and i was pretty much left to it. there were three pieces of writing; one by hugh and two by andrew, so i organised the publication into three sections based around them. I knew that i wanted to present andrew’s piece we had stayed up all night in the centre pages opposite one of shaun’s lorry drawings so that meant that the preceding section could be devoted to hugh’s written piece: a minor place, and the following section to andrew’s stock footage. for the first section i had a range of photographic references, preparatory works, and final artworks that all three artists had provided for me to select from. i enjoyed the task of making connections between the written and the visual; pairing them up seemed to come relatively quickly, quite naturally.  I also enjoyed having to consider varying the composition of the work, thinking about pacing and impact, keeping things different but also making sure that the whole thing tied together. stock footage provided more of a challenge because there were 18 verses and an image to go with each which initially led me to think of presenting them in a uniform way but for the publication didn’t think this would be interesting enough across several pages (i didn’t have to include them all, but i thought i would see if i could make it work). instead i decided to do the opposite and try to present them differently from one double page spread to the next, while keeping the style of type consistent with the rest of the booklet.

i’m glad the artists were pleased with the outcome because i enjoyed working with them and with their work, and was grateful to be a (small) part of what was a great exhibition. 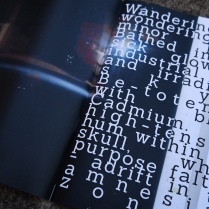 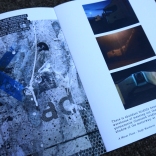 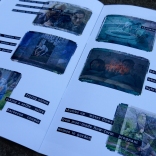 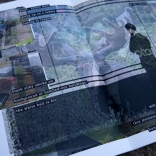 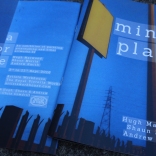 you can read more about the exhibition on hugh’s blog here and on shaun’s blog here, and this is a link to andy’s wordpress blog.