visions of a free-floating island 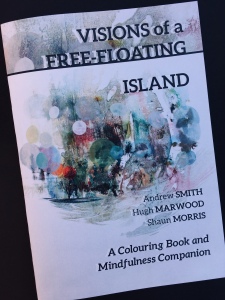 i recently worked on this booklet for artists andrew smith, hugh marwood and shaun morris for their exhibition at surface gallery, nottingham. the title is taken from andrew’s painting featured on the cover which they had selected to use for their promotional material. rather than a traditional exhibition catalogue or a publication that included the exhibited work, they had decided they wanted to produce something in the vein of a colouring book because of its connotations of mindfulness and how this linked into some of the work directly, and indirectly. other than that, the brief was pretty open.

the booklet is twenty pages in total. the opening spread a collection of phrases and fragments gathered by hugh and set against a cropped photograph of one of hugh’s sentinel or childish things sculptures. i didn’t know at the time that he had actually applied some of these phrases to the sentinel sculptures, and so it turned out that i’d used the same background as he had for them. the middle section was a series of images of the artists’ work reduced to line drawings perfect for colouring in. the final section was a piece written by andrew titled a therapeutic conversation that i presented against cropped sections of the painting used for the cover. The back cover features part of one of hugh’s flagging pieces, the union flag consciously incorporated.

i always love working with these guys, and as an admirer of their work it’s always great to get to play with their creative output. i’ve included links to their online activity below so you can check out more of their work.